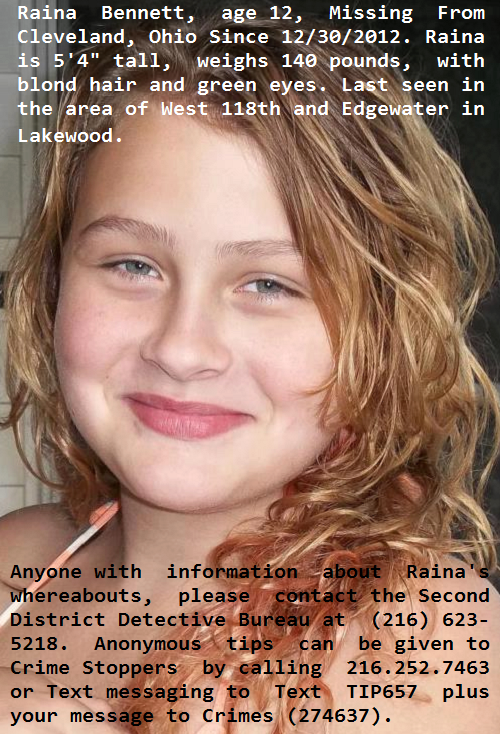 Her mother Laura admits this began when Raina stormed out after a fight. She was on foot, without a phone, or even shoes.
She called a friend a day later. It was traced to the Travelodge Motel on Edgewater Drive and West 117th. Her mom says the clerk recognized Raina's picture immediately.
"She said she'd come to the desk Monday morning very disoriented, not knowing where she was, not knowing what time it was. She had to question where she was. Was it day or night? In the company of an older black male," said Laura Bennett.
Lakewood and Cleveland police are now involved, and her family says they shared suspicions about the man she was with.
"That he was not your fine upstanding citizen -- that he was sought out by many people and the belief was that they were pimping her out," said Bennett.
Her loved ones say she hasn't contacted anyone in days.  http://www.19actionnews.com/story/20497215/12-year-old-cleveland-girl-missing

August 13, 2010
Only one of Rands multiple suspected victims has ever been found. She was Jennifer Schweiger a 12 year old with downs syndrome that he buried at his campsite in the woods near the mental hospital he was janitor at. He  got 25 years to life for her kidnapping and murder.  Here is a list of other possible victims who's bodies have yet to be found:  Alice Pereia, Holly Ann Hughes, Tiahease Tiawanna Jackson & Henry Gafforio. Audrey Lyn Nergenberg, an eighteen-year-old who disappeared in 1977 is also believed to be linked to Rand. Let's help Staten Island police solve these cases and brings these kids home for their families to bury. He spree of terror lasted from at least 1977 to 1987 when he killed Jennifer. At right is a picture of Jennifer, an innocent young life needlessly lost.

March 05, 2019
I have started a new Facebook group Healing through justice for the victims of Felix Vail . Vail was serial killer who’s 1st known victim was his 1st wife whom he is incarcerated for drowning in 1962. It took over 50 years to convict him. I am now working with the mother of his 17 year old 2nd wife Annette Craver who vanished in 1984. He also had a girlfriend in the 1970’s who vanished named Sharon Hensley. I will also have Annette’s mom on KIDMISSING RADIO on April 6,2019. I would like to thank Rusty Arnold for directing Mary Rose’s friend Binney to me and Binney for for connecting me with Mary.
3 comments
Read more

December 28, 2010
The murders of 4 children in Oakland County,MI who were carefully cleaned and had their clothes washed dried and ironed got their killer dubbed "The Babysitter Killer". Now thanks to the father of one of the victims we now know who more than likely killed them and maybe more. The first victim was Mark Stebbins,12 from Ferndale,MI Feb. 13,1976.His body was found in a parking lot 6 days later. The next victim was Jill Robinson,12 taken from Royal Oak on Dec 12,1976. Her body was found in Troy. The 3rd victim was Kristine Mihelich,10 who was taken from Berkley on Jan. 2,1977. The last victim was Timothy King 11 taken March 11,1977 from Birmingham. His body was found in a ditch near Livonia. It was his father that learned the identity of the killer through a freedom of information lawsuit out of which he recived the case files. It is clear from those files that a local pedophile named Christopher Busch was the killer of these 4 children and maybe more. He also was convicted on 4…
5 comments
Read more